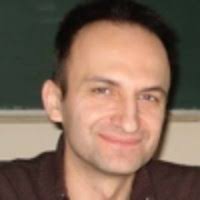 Robert Pezer (213706) was born in 1970 in Zagreb. He has been a staff member of the University of Zagreb Faculty of Metallurgy since 2007 and in June 2013 he was appointed Associate Professor. He currently works within the Department of Physical Metallurgy. He teaches and gives lectures in Physics and Applied Mathematics.
Robert Pezer completed an undergraduate study program at the University of Zagreb Faculty of Natural Sciences, where he also completed a PhD program in 2002 and worked as Research Assistant in the period from 1996 until 2007, mainly in the field of many-body and statistical physics phenomena within the nuclear theory group. His research interests are associated with the ultracold gases theory and nonlinear optics, ranging from exactly solvable models to designing new experiments with a focus on evaluating quantum observables in many-body systems for purposes of experimental verification. His significant competence and knowledge in computational techniques and software development is evident from the numerous developed software packages. He has collaborated actively with researchers from several different disciplines of theoretical and experimental physics, particularly nuclear physics, nonlinear optics and molecular physics and ultracold gases. He is an active referee for: IOP Publishing, Physical Review, Optics Letters and Journal of Optical Science. He has a strong scientific research interest in numerical modeling of many-body systems, statistical physics and the related phenomena aimed at improving the “ab initio” (DFT, MD, LBA) models, bridging the gap between microstructures at the lowest relevant physical scale and macroscopic properties of complex systems.

He has published 17 CC scientific papers (being the principal author in the case of 7), 7 refereed conference papers and 4 papers out of the CC database. He has presented his work at a dozen of conferences and workshops. He is also a member of the Research Group at the Department of Physics of the University of Zagreb that is strongly devoted to research activities associated with “ab initio” computational modeling of complex systems. Robert Pezer, PhD, holds several physics courses at the Faculty of Metallurgy. He has been one of the leading members of the Working Group that carried out a substantial revision and implementation of undergraduate and graduate study programs in metallurgy. During the period from 2009 until 2013 he served as Vice Dean of the Faculty of Metallurgy responsible for teaching and study programs.